Have you ever had a dream that came to life? How about losing the one you love and not being able to save them? What about a gift that you were cursed with? Well image having all three like Sicily "Sissy" Monroe.

"Some might say what I have is a gift. I say, I want to return it." Sissy declares. 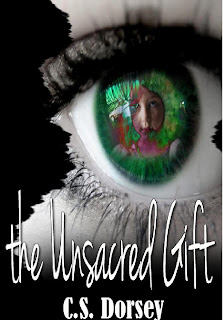 Sicily "Sissy" Monroe has all the qualities of a perfect young lady. She is almost where she wants to be in life. But lying deep in the pupil of her eyes hold something that she cannot get rid of which interferes with her plans. She fights everyday with no one but herself. After having her first vision at age six of her sister's (Misty) disappearance and the dreams of failing to save her, Sissy wants no part in another person's fate. For years Sissy tried hard to avoid contact with people because she feared foreseeing their death. In keeping with this, she tries to stay away from her family. Little did Sissy know she could not run from her past, or her gift. She hopes someone will put her out of her misery, but she will soon discover that her visions and dreams were just a mere image of herself. Author Bio
C. S. Dorsey currently lives in Northern California. She graduated from the University of Phoenix with an Associate's Degree in Financial Services, and is currently working for a financial institution. She never thought about writing until one day this girl started talking to her in her head and never stop. She has written other young adult books including best selling Lukos Trilogy.


About The Unsacred Gift
When Sissy was six, she had her first vision of her sister’s (Misty) disappearance. Her mother (Tina) said she had a bad dream, but not long after that Misty vanished before Sissy’s eyes. No one believed her, so Sissy acted like everyone else. Like she never disappeared. Like she never existed.

Sicily “Sissy” Monroe attends the University of Washington, majoring in Psychology. She has all the makings of a perfect young lady, ageless skin, flawless long black hair, full kissable lips, and eyes shaped like almonds. But deep lying in the pupil of her eyes holds something she cannot get rid of, which is interfering with her plans.

For years Sissy tried to avoid having friends and relationships because she feared their fate. Most importantly she tries to avoid her family. She has no plans of ever going back home to California. When her mother calls her to tell her about her granny’s birthday party, she is reluctant to go. Going back home was not on her list of priorities, but she is going for her mother.

During her weekend at home, new developments surface. Her mother has been dating (Mark) for the past two years, her grandmother has the same gift she does, an old high school fling (Chris) comes clean about his love for Sissy, and an unknown girl from the grave begins stalking her dreams. Sissy begs for someone to admit her to the hospital, but she just can’t get the words out. Her grandmother is the only one who can help her, but even then it’s too late.

Two days after her birthday party, Sissy’s grandmother dies leaving Sissy alone once again. Sissy has no one to turn to, but she will soon discover that her sister Misty, the visions, and the dreams of the unknown girl were just a mere image of herself.

To learn more about C.S. Dorsey and The Sacred Gift:
Blog
Twitter
Goodreads
Facebook
Posted by Flo at 12:00 AM