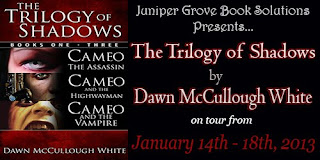 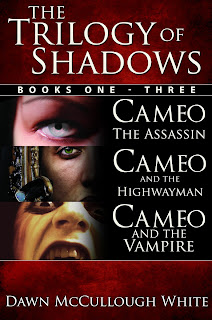 
Cameo the Assassin~ The Kingdom of Sieunes is rife with taverns, dirty streets, and clay pipe smoking citizens all toiling to feed their families and keep themselves in something little better than rags. With a foiled revolution just ten years prior still burning in the hearts of many, the royals enlist the aid of assassins to keep things in order.

The townsfolk entertain themselves by dreaming of better times to come and regaling in stories of the undead said to walk the graveyards at night... and of Cameo the killer with corpse-like eyes... Scarred and jaded Cameo is one of the most effective assassins in the employ of the Association, moving from one mission to the next as long as the alcohol keeps flowing.

Her acceptance of the murder-for-hire lifestyle is thrown into doubt when she meets a local highwayman with a penchant for fine clothes and women, and then she begins to think about breaking with the company but no one ever breaks with the Association under good terms.

Cameo and the Highwayman~ The land of Shandow is a place of arctic cold, the scene of the bloody revolution and the location of the item Cameo's master wants so badly. In the dark of winter a vampire lies in wait... Opal is unable to run from his past... and Cameo must make a choice that will cost her the last shred of humanity she has left.

Cameo and the Vampire~ A vampire's bite tormenting Cameo, she pushes forth on a journey that will find her descending into darkness and at Kyrian's request she is forced into the confrontation she has been avoiding for over fifty years with the undead that made her...

Excerpt:
HER EYES WERE WHITISH, corpse-like, caught in the sliver of moon through a tall window overlooking the Azez, and she searched Opal’s face with those dead eyes… a zombie’s eyes.
He had finally fallen asleep after midnight. He had fought it, but lounging in the canopy bed, his head resting against a silk pillow that threatened to engulf him, he eventually succumbed to slumber. He hadn’t bothered to remove anything but his boots.
Kyrian was asleep on one of the fainting couches at the other end of the room.
The room was so quiet. The fire had gone out, and a plume of smoke slipped up and out the chimney, wispy, like a ghost. The room was mostly dark, lit only by the moon, so where the light did fall it caught everything in a gray light. Like Opal’s face.
In his finery, he looked like a romantic painting. The bellowing sleeves, the lightness of his ruffled shirt, and a lone ribbon that dangled down off the mattress. His face was pale in the moonlight.
At the doorway she saw her thralls, the shadow-men whom she had sent to find Ivy’s bones, the treasure that her Master had sent her to seek. They were back, and she couldn’t dally. That could only anger Haffef, and the only time she had done that, she had very nearly died. They stood at the doorway awaiting her next move.
She had hoped they wouldn’t be back so soon.
Cameo slid from the chair she’d been perched on and knelt down silently beside the bed. She removed an empty wine glass from Opal’s hand and set it on the floor.
“Opal,” she uttered, gently brushing a lock of hair off his face.
He stirred, but there was no reply.
She turned and motioned the shadows on ahead of her then, without further pause, swept out the door with the speed of something supernatural. 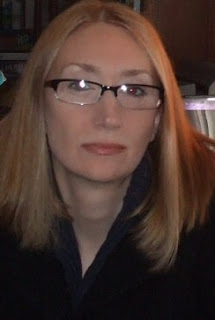 Dawn McCullough-White writes mainly dark fantasy. Her novels tend to favor the use of
anti-authority anti-heroes as the main characters, most commonly with a strong, female protagonist.

Dawn was born in 1969, in Rochester, NY, and began writing prose at age 14. Ms. McCullough-White is married and has a young son. She is fascinated by history and social psychology. She is a vegetarian and animal lover. Her favorite drink is Gewürztraminer. She's fan of Alice in Chains, U2, and Stabbing Westward, her favorite books include The Things They Carried by Tim O'Brien, A Movable Feast by Ernest Hemingway, and The Social Animal by Elliot Aronson. Dawn is represented by the Kleinworks agency.