I appreciate you taking the time to answer some questions about your work. I've read all of the Tales that have been published so far and I have found them to all be very unique. The underlying fairytales were all familiar but the works themselves have been very much their own stories. The more of them I read the more I wanted to do this interview.

I grew up in Burbank, California. That’s the home of Disney Studios, and not far from Disneyland, so I grew up watching all the films and learning the history. My mom was also really into the supernatural, so we’d always be going on ghost tours and visiting psychics. I think that combination was influential to my imaginative world, even after I left for college and then moved to Phoenix, Arizona.

Have you always been interested in horror genre or have you written other types as well?

I’ve tried writing all kinds of genres, but they always seem to end up suspenseful or creepy. Zombie Fairy Tales was not so much an attempt at writing horror as writing fairy tales.

Why such an interest in zombies? What gave you the idea to write this short story series?

As much as zombies have been capitalized on lately as a plot device, most of what’s out there is presenting them in exactly the same way. Very little is out there that tries to explore the inner life of zombies, and I wanted to do something for a while that investigates the idea that maybe there is a deeper inner life there, even if still a primal one, and that zombies simply lack the means to express it. As for involving fairy tales, I had the idea for Zombie Cinderella a few years ago, but never did anything with it. Then last fall I had the urge to write an anthology series, and it was my favorite option on the list, so I started developing more stories to make it into a series.

Mary Shelly's Frankenstein is evident in The Zombie Pinocchio and of course we see Grimm's Fairytales, but what other authors have been an influence on your work?

There’s a lot, actually. Patrick Suskind has probably had the biggest influence on the series so far, more so in energy and spirit than technique. I had a bit of an obsession with his work about two years ago, tracking down all of his out-of-print titles and re-reading Perfume: The Story of a Murderer several times. He’s probably my favorite modern author, even if he hasn’t released a book in ages. (I don’t understand how he can waste such a talent.) I also really turn to the obsessive characters in Dostoevsky and Woolf whenever I need to get my thoughts racing. R.L. Stine’s Goosebumps was one of my favorites growing up, and it was what gave me the idea to make my series monthly. Films and television have also had a major impact on the series, including, oddly enough, Batman: The Animated Series. The villains always had an emotional tragedy they were trying to overcome, and whenever I wanted to make my villains more sympathetic, I’d ask, “How would Batman do it?”

The cover art for your books fits the stories very well. Did you design your cover art or do you have someone that does this for you?

My boyfriend David is a professional photographer, so he’s responsible for the creepy cover art. We also have a friend, Desiato Khan, who is a really talented fashion designer, and he does all the costumes for us. I’m very lucky to have such talented people to help me.

#5 Beauty Is a Beast was just released so there are seven more to go in this series. Do you care to give us some hints as to what is in store for us?

There’s actually more than seven left. There will be twelve titles total in the main series, and then three additional holiday-themed stories that will be released once a month during the last quarter of the year. We’ll be covering most of the major fairy tales. I think the two I’m looking forward to the most are versions of The Little Mermaid and the Little Match Stick Girl.

After the last Zombie Fairytale is released in December do you have plans for a different series or a longer novel?

Yes, and yes. I’m currently in the final stages of editing of a full-length novel, although I probably won’t release it until next year. It is a much more ambitious zombie retelling than anything in Zombie Fairy Tales, and I’m really excited for it. I also have started plotting a new series for next year. I’m not ready to make any announcements for it yet, other than saying it will be a YA dystopian series with zombie elements.

One last question just for fun: If you could meet any dead literary figure who would it be and why?

I think I’d want to meet Virginia Woolf, but only if she were played by Nicole Kidman. I think she’d have the best advice about writing and life.

Is there anything else you would like to add?

Just a thank you to all the readers of Zombie Fairy Tales. The support and fan feedback has been a very welcome surprise, and I’m very grateful that so many people have enjoyed the series thus far.


We here at the Cotton Patch appreciate you taking the time to be interviewed. I have definitely enjoyed your Fairy Tales so far and am looking forward to more of them. Its definitely been interesting learning about the man behind the stories. 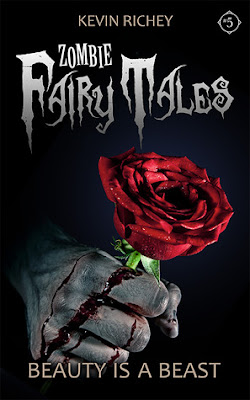