Venom of the Serpent's Cunning

The wait is finally over! Those eagerly waiting to see what happens to Andy next need wait no longer. Book Two of this highly-rated fantasy series is now available in Kindle eBook and paperback at Amazon.

Venom of the Serpent’s Cunning is the continuation of L. R. W. Lee’s well-received debut novel Blast of the Dragon’s Fury and the next offering in this seven-book Andy Smithson allegorical series for middle graders.

In Venom of the Serpent’s Cunning, Lee continues to weave a tale of mystery and intrigue as the main character, Andy Smithson, who is now 11-years-old, returns to Oomaldee to retrieve the second ingredient needed to break a 500-year-old curse enacted to punish the current ruler for murdering his older sister when she was 15. Not one to forgive easily, Imogenia’s spirit is bent on thwarting Andy to preserve the curse and naively aligns herself with the evil, scheming Abbadon.

Things go from bad to worse when a creature Abaddon conjures from the darkest magic steals the Stone of Athanasia, the source of the ruler’s immortality, causing the king and his wizard, Mermin, to fall gravely ill. Andy is forced to choose between retrieving the stone to save those he loves or obediently going after the second ingredient. What will he chose? Will he be able to save the King and Mermin?

You won’t want to miss the non-stop action, drama and thrills on this adventure that is Andy Smithson: Venom of the Serpent’s Cunning, Book 2.

“This series has everything a kid could want, action, adventure, magic, excitement and mystery!” - Erik Weibel, This Kid Reviews Books (Erik is 12)

"LRW Lee has constructed a wonderful world full of adventure, daring deeds, and remarkable action tempered with the right dose of humor. This wildly addictive series will entertain middle grade students, who, like I, will anxiously await the release of book three." - Sue Morris, Kid Lit Reviews

“There is a strong good versus evil theme underscoring the plot making it a clean story with no bad language but lots of exciting action and suspense. If you adore fantasy books with a medieval theme including knights and dragons, this story definitely fits that bill.” - Wayne S. Walker, Home School Book Reviews 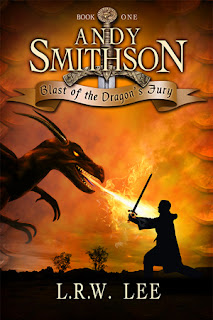 From the After Life, ten-year-old Andy Smithson’s relatives initiated a curse 500 years ago. Now they no longer agree it should continue and one is willing to sacrifice Andy’s life to end it. Unaware of the disagreement and with no say in the matter, Andy is unexpectedly and magically transported from his home. He finds himself in the Land of Oomaldee, facing mortal danger at every turn as he seeks to find a scale from a rare red dragon, the most ferocious of dragon species, to break the curse and save his life.

If you have not yet had the opportunity to experience the Andy Smithson series, L. R. W. Lee has launched the serialized podcast of Blast of the Dragon’s Fury, Book 1 which is available for free at:
iTunes store
Author’s website

I remember having a sense that I did not have a narrative of deeper meaning to share as I grew up, but I always looked for one. It was when I brought on a partner to help me grow a multi-million dollar company I had founded that I observed that my partner/mentor was teaching me philosophies for business, but also narratives that were significantly changing how I lived my life, making it more peaceful and meaningful.

After selling the business in 2012, I knew I wanted to share the uncommon life principles my mentor imparted to me with readers in the hope that after spending several hours with me, their lives might be better, not just having been entertained, but impacted longer-term. A few of these uncommon principles include overcoming frustration, impatience, fear, and jealousy. As well, they include understanding why it makes practical sense to tell the truth, and understanding that success in life comes from responsibility, diligence, and dignity to name a few. As you can tell, this is my passion to accomplish through my books!


As for the specifics of the Andy Smithson series, I’ve always loved books set in medieval times with castles and sword fighting, so the world of Oomaldee evolved easily in my mind. The specifics arose as I thought through what scenarios might help me create a riveting tale while also accomplishing my objective of imparting uncommon life principles as part of the story line without hitting kids over the head with lessons that killed the story line.

Bootheel: What would you compare the series to?


LRW: People tell me it reminds them of the Harry Potter series as well as the Chronicles of Narnia and the Lord of the Rings. I think it’s because it’s a coming-of-age adventure where a boy is plucked from obscurity and must overcome many tough obstacles to help those he loves.

Bootheel: When do we get part three?


LRW: Book 3, Andy Smithson: Disgrace of the Unicorn’s Honor is in process and due out in Fall 2014.

And there’s more! As part of L. R. W. Lee’s book launch tour, you have the opportunity to win 9 fantasy adventure ebooks from highly acclaimed authors. To enter go to the author’s website at http://www.lrwlee.com/#!giveaway/chq4.