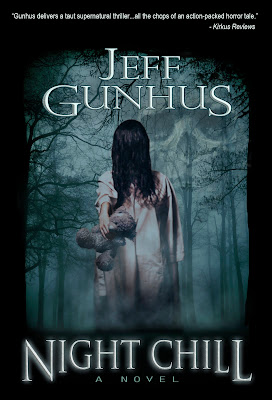 Emotionally scarred from a car accident in which a little girl was killed, Jack Tremont moves his family from Southern California to Prescott City in the quiet mountains of Western Maryland. At first, the small town appears to be the perfect place to reconnect with his family and to cure his troubled conscience, but Jack soon discovers he has left one nightmare only to walk into another. When a stranger who has been struck by lightning dies in Jack's arms, a child's voice comes from the man's smoldering body to issue a warning:
They're coming for your little girl, Jack. . . you better run. Take your family and run.

The warning turns prophetic when a local cult targets Jack's five year-old daughter Sarah and Jack finds himself in a fight against dark, supernatural forces that he cannot begin to understand. With the help of a mysterious Native American, Jack uncovers more than just a conspiracy that extends into the small community, but an ancient mystery larger than anything he could have imagined. Suddenly, he's not only fighting for his family, but also to stop a devastating evil from escaping into the world. Above all, he must rush against the clock to save his little girl.

Buy the book at Amazon!

Enter the giveaway for a $25 Amazon gift card & Signed Paperback


Excerpt:
The lights in Piper’s flickered and then came back on. Thunder exploded outside so loud that it felt like it was in the room. Grown men straightened in their chairs. It was a few seconds before the tension was broken by nervous laughter around the bar as the fight-or-flight impulse buried in each man’s psyche gave way to rational thought. Everyone went back to their drinking.
“Blowing hard.” Max said, looking a little guilty for his outburst and sounding eager to change the subject. “We better head back to the house.” Max looked out of the window. Without warning, he shouted, “Someone call a doctor!”
Max pushed himself out of the booth, his beer mug crashing to the floor. Jack twisted his head to look out the window. His stomach turned. Right in front of him, not more than ten yards away in the parking lot, was Albert James. Or what was left of him.
Jack turned away from the window. “Call a doctor!”
“I’m doing it,” Jim Butcher yelled back. “What’s going on out there?”
People were scrambling to the windows by now. Others were heading out the door to follow Max outside. Jack ran to the door with them and raced to where Max was huddled on the ground.
Albert James was more in need of a hearse than an ambulance. That much seemed certain. A six-inch crater was dug out of the man’s head right above his eyebrows, charred black by the heat of the lightening. The hole marked the entry point for the million volts of electricity that reached out from the black clouds to run the length of the Albert’s body. As it passed through the soft flesh, it blew ragged holes through the skin, holes that now leaked thick, viscous blood on the black asphalt. The blood poured out fast enough that even the driving rain couldn’t wash it away fast enough.
“Jesus, I think he’s still alive,” someone said.
“Shee-it. That boy’s dead as they get.”
Jack got down on his knees next to Max. This close he could smell the burned flesh and see into the head wound. It was deep, probably three or four inches. The intense heat of the lightening had cauterized the wound. Jack realized he was looking at a perfect cross-section of Albert’s brain. It was too much for him. He was going to be sick. He turned to vomit but something grabbed at his leg. He looked down and saw the hand on his knee. It was a bloody pulp, each fingertip blown out where the lightening had left the body. Still, it flexed into a fist, digging into his muscle. The men around the body around saw the movement and staggered backward.
“Oh shit, Goddamn som-bitch is still alive.”
“Shut up. He’s tryin’ to say somethin’.”
Jack shook his head. It was impossible. He was looking right at the man’s exposed brain. There was no way he could be alive. The hand could be nerves, like a frog leg twitching after it’d been cut off. But alive? Couldn’t be. Still, sounds were coming out of Albert’s throat. More than that. His lips were moving as if trying to form words. Reluctantly, Jack leaned in and put his ear next to the dying man’s mouth. The stench of the burnt skin was almost unbearable. Next to him, Max whispered, “What is it Albert? What are you trying to say?”
Jack was soaked to his skin. The storm raged around him. But for a few seconds all that disappeared. The world faded away and it was just Jack and the man dying on the asphalt underneath him. The words came out slow but clear. They were exactly what Jack feared they’d be. You caint stop the devil, Jack. You jus’ gotta run from ‘im. Gotta run. Gotta… Albert James’s hand went limp. A slow exhalation of breath and then he was gone. Jack looked up at Max.
“Did you hear that?” Jack asked
Max shook his head. “I didn’t hear anything.”
Jack stood to the side as they dragged Albert James out of the rain and waited for the ambulance to come take him away. Everyone wanted to know what Albert had whispered in Jack’s ear, but for some reason he didn’t feel like telling anyone. Somehow, he felt that he wasn’t supposed to, that the message had been meant for him alone. He stood in the rain and wiped blood off his clothes, repeating the warning over and over in his mind. Finally, Max convinced him to go inside and have a quick drink before they went home. It was already eight o’clock. For the second time that day, he was late.