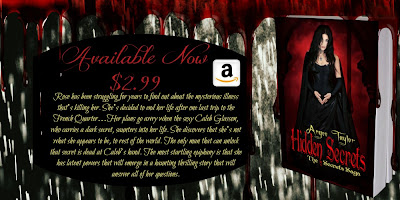 Blurb:
Rose has been struggling for years to find out about the mysterious illness that’s killing her. She’s decided to end her life after one last trip to the French Quarter…Her plans go awry when the sexy Caleb Glasson, who carries a dark secret, saunters into her life. She discovers that she’s not what she appears to be, to rest of the world. The only man that can unlock that secret is dead at Caleb’s hand. The most startling epiphany is that she has latent powers that will emerge in a haunting thrilling story that will answer all of her questions. 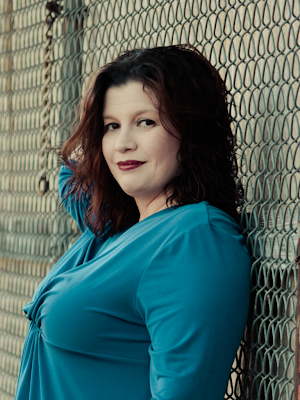 Angee was born in Houston, Texas in 1977, to an interesting family. Her mother and father separated when she was young. She lived with her
mother who later remarried a wonderful man, who had a huge impact on her as she grew up. Angee has always had a love of reading, mostly paranormal. As a child, she would sneak up at late night when her mom thought she was sleeping, to read. They moved around a lot, eventually settling in Deep East Texas. Angee married at a young age and eventually divorced. She has raised her now 15 year old son alone. Angee works full time as a pre-hospital nurse and sometimes sees things that would make the rest of us have nightmares. On other days, she is blessed to see miracles. These things are what drive her to write. Angee describes her job as- “I fight to save people’s lives. Sometimes I lose, sometimes I win. It's the emotional roller coaster of that job, which leads me to writing. I'm able to put those emotions into my characters and let them out of my heart and soul.” In 2006, she was diagnosed with a rare disease, shortly after that she was told she would be on full disability in five years and most likely to be dead in ten. She’s fought to live a normal life every day sinceand is beating those odds. She works at a demanding job, is a single mom, cares for an elderly mother, and a hyperactive dog. Her life has inspired her Paranormal novel Hidden Secrets. Sit back and enjoy.