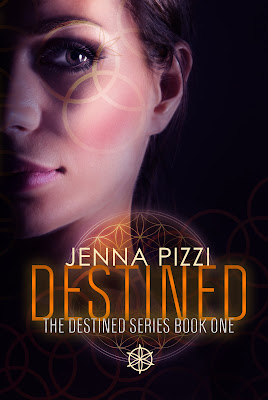 Synopsis: Destined (the Destined Series) YA/NA Paranormal Romance about Angels and Demons. Lilly has always been plagued by dreams; she dreams of another place and time, a place of pure beauty and light that suddenly erupts into fire and destruction. Then, there is a man with the haunting blue eyes that seem to look right through her very soul. In one fateful afternoon Lilly learns that the dreams are more real than she could’ve ever imagined. They are a link to who she really is; the Gatekeeper to the realms. Born from both light and dark, with her memories bound, she learns that it is her destiny to gather the relics of the flower of life. Lilly must do this in order to close the gates before the under realm destroys them all, but there are those who will stop at nothing to keep her from fulfilling her destiny. There are those who will try to sway her into the dark. She is torn between the love of two brothers; one, her loyal warrior, who has loved her since the beginning, and the other with the enthralling blue eyes that speak to her soul. One brother fights for the light, while the other fell into the darkness. Will she choose the brother that her soul longs for, or the brother that her heart calls out to? 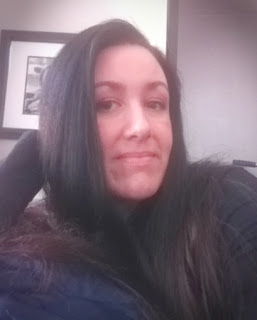 Born and raised in Massachusetts, Jenna settled into America's hometown where she proudly calls home with her family. She is an avid book reader and collector with an entire room dedicated to her passion. At the age of twelve years old Jenna began writing, determined to be just like Stephen King or Dean Koontz. For her it all starts with the flick of an image. From there a story is born. Being an eternal romantic, Jenna is a true believer in happy endings. It's the rest of the story that anything is possible. Writing is her passion. It is something that helps her unwind at the end of the day. She likes to tell stories that will pull at your heartstrings, or simply whisk you away even for just a little while. So grab your favorite blanket, and a hot cup of coffee and settle in for the ride.

Excerpt: Samil ran his fingers through Lilly’s hair. They were sitting in front of the fireplace.

“You have no idea how long I’ve waited for this, for just a moment alone with you again.” He leaned down and kissed her gently on the lips. She felt a tingle on her hand. She thought she was just caught up in the moment. Samil noticed her palm glowing blue and backed up. “No, not already, you just got here.”

She looked down and noticed what he was talking about. The palm of her hand that the compass had branded was glowing blue. She jumped up in shock and started shaking her hand.

“What’s happening? Why is it doing that?” She asked him.

Samil stood and grabbed her hand.

“Don’t be afraid. It means it is time. It will lead you to the first relic. I thought we’d be able to have more time together.”

Lilly couldn’t stop herself; she grabbed him and kissed him.

“If this ends up being our last moment alone together, then I just need to feel you, here in the flesh.”

Samil looked at her questioningly.

“Are you sure, Lilly? It will only complicate things even more.”

“I have never been so sure of anything.”

He lowered her down in front of the roaring fire. She smiled up at him. He noticed the way the fire reflected in her eyes. He swept the hair to the side and lowered his lips to her neck and tenderly kissed her. Lilly trembled at his touch. He ran his hands down the length of her body. Just his simple touch made her moan in pleasure and anticipation. When his lips brushed hers, she lost herself to him.

The door to the room blew open. Usha stormed in. Samil broke his hold on Lilly as Usha hurled a statue at them. Samil pulled Lilly to her feet and stood in front of her to block Usha from her outburst.

“What do you think you are doing, Usha? This is my chamber and you do not come barging in here.”

She strode over to them until she was only feet away.

“I will do whatever I want. I am the princess. How dare you have your hands all over her? I can smell her on you. It makes me sick.” She started spinning around staring at the ceiling. “I don’t know why you don’t get it, Samil; you can never be with her. Ugh! I am so sick of everyone buckling down to this stupid girl. She’s nothing.” She ran her fingers down the front of Samil’s chest. “She won’t touch you the way I can. She can’t offer you a whole kingdom like I can. So what is the appeal of some little insipid half breed? She doesn’t even belong anywhere. She’ll be dead in the end anyway. Caleb won’t die for her this time.”

Samil could feel Lilly flinch at the last sentence. She didn’t understand what it had meant. Usha sensed her shock because she laughed.

“Oh my goodness, no one told you. How delicious. One of you lives and one of you dies, Lilly. One of you must choose but only one walks away.”

“Of course not, that’s why you are stupid. One of you must die in order to seal the gate. Somehow you have always convinced Caleb to do it, this time he won’t allow himself to be near you until it is time for the choice. He will be claimed dark and kill you to seal it. Oh this is just tasty. No one bothered to even tell her about this. I’m glad I got the privilege.” She was gloating in her little victory when Seth appeared in the doorway. Tangela stood by his side.

“Samil,” Seth yelled out. “I should have known you’d lead a council member astray. How could you do this?”

Samil closed his eyes and Lilly could feel his hand squeeze hers.

“Go Lilly, go with Seth. I will see you when I can.” He covered her palm with a red velvet napkin so no one would see that it was glowing blue. Seth lunged at Samil and the two fell to the floor. Lilly could see Usha pull a sharp object from her leg and she jumped toward Lilly. Tangela rushed between Usha and Lilly and blocked the knife. She punched Usha square in her chest. She fell backward and grabbed her chest.

“You bitch, I will kill you,” she screamed at Tangela.

“Bring it, bitch. I’ll see you on the battlefield.” Tangela laughed.

Tangela grabbed Seth and rushed them out the door. Lilly didn’t want to stay, but she didn’t want to leave Samil. She wanted to find a way to be with him again. She looked behind her as she left the room. His hair was all disheveled and his eyes gave way to his sorrow. Seth pushed her through the door, grabbed hold of her hand and pulled her out the door. She watched it close behind her.

They ran down a series of long hallways. Tangela led the way and Lilly and Seth followed. Seth stood behind her to make sure no one grabbed her. She could hear Usha scream at the top of her lungs. She was calling her minions to find and attack them. Seth pushed Lilly even faster, but she was barefoot and wearing a thin dress.

They rounded a corner to the next hallway when Tangela stopped short. There were five minions blocking their way. They were all smiling with their jagged teeth. They seemed larger than the ones she had come across out in Plymouth. One of them took a step forward and swung at Tangela. She got slammed against the wall. He laughed as she curled into a ball in pain. Seth jumped in front of Lilly and pulled a sword off of the wall. He pitched forward and slit the minion’s chest open. The minion crumpled to the floor in shock. Seth rushed forward to fight off another one. Lilly ran to Tangela’s side and helped her up. Someone grabbed her from behind and lifted her off of the ground. She screamed and it got Seth’s attention. He ran back to her and stabbed the minion. The minion dropped her, and she fell to the ground. Seth lifted the sword and swung. He took the minion’s head clear off of its shoulders. Tangela saw Lilly’s hand and grabbed hold of it as she yelled for her to run.

“Run, Lilly. We need to get you out of here. Let Seth fight them. It is what he was trained for.”

Lilly followed behind her and they ran up a staircase and down another long dark hallway. Tangela stopped in front of a large steel door. She opened it and pushed her through. Lilly found herself back in the tunnels. This one was different from the ones that lead to Maidstone. She didn’t like the way it felt so she ran as fast as her feet would take her. She could feel something around her.