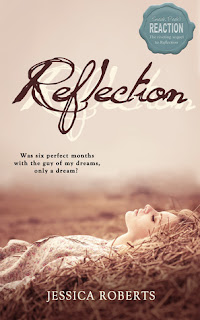 Bright, spunky Heather Robbins has escaped her small hometown and is anxiously beginning her freshman year of college. Rising above her rocky childhood, she’s found a place where good things are finally starting to happen: her own private apartment, refreshing college classes, and an intense attachment to a mysterious and rugged classmate, Nick Richards.

But when her dreamy college life turns out to be nothing more than a wonderful dream while resting in a coma, questions threaten.

Now, Heather must press forward to unlock the real past, and find the answers buried deep in her mind. What she unlocks instead is a roller coaster ride through flashbacks, embellished memories, and a whirlwind romance.

And when it’s all over and she comes face to face with the truth, will she lose everything she’s fallen in love with?

And then all of a sudden Nick got up. While my brain was determining where he was going and if I’d gone too far, my eyes studied his physique as it strolled away from me. His t-shirt clung to the evident muscles of his upper back, hanging flawlessly in the hollow down to his waist. I’d never noticed something like that. To my eye’s dismay he hunched behind the counter. I was fascinated and confused by the draw I felt to him and the alien emotions pulling inside my stomach. Emotions I was certain I’d never processed before.
A few seconds later his eyes fastened on me. “Garbage?”
“What? Oh.” I stood, laughing sheepishly. “Yeah. I don’t have one. I mean, I need to get one.” I placed my clumsy hands on my hips and then glanced behind me because I didn’t know where else to look.
Visually I followed him as he wadded the white paper in his hand, snatched his keys off the counter, and strolled toward me. But because my eyes were nervously stiff I didn’t really see him. I twisted Creed’s ring around my finger; then my hand scratched the back of my neck; and then my foot propped behind me on its tiptoe and I almost lost my balance.
Say something! He’s leaving!
“You’re leaving already and I haven’t even finished my sandwich.” I scrunched my nose at what came out. “Not that I want you to stay or anything. I mean, it’s your choice to stay or leave but—”
His nearness cut me off. In the course of my bird-brained comments, he had been advancing toward me, finally stopping uncomfortably close to me. His lips were curved in a wicked grin and I swallowed with a bashfulness I rarely felt.
To my utter shock, a hot finger lifted my chin and our faces came even closer. Too close.
Breathe, Heather.
“Would you like that, if I stayed?”
My eyes dropped from his, but they only made it to his chest since he was holding my head in place.
“Actually, I have so much to do today,” I said, trying my best to sound bored. But my voice held a nervous quiver that most likely made him smile more.
Though he dropped his hand from my face, he didn’t back away and his deep voice rumbled through my head again. “Some of us attend class.”
My nose scrunched. Had I missed class this morning? Before I had time to pinpoint what day it was, he was gone.

JESSICA ROBERTS grew up in the San Francisco, California Bay Area where she spent most of her time playing sports alongside her six siblings. She was crowned Miss Teen California her senior year of high school, and went on to Brigham Young University where she graduated in Human Development. Her love of family, church, writing, athletics, and singing and dancing keeps her life busy and fulfilled. She currently resides in Utah with her husband and three children.