Thanks for letting me interview you and for stopping by The Cotton Patch.

Please tell us a bit about yourself.
I’m eighteen years old and I just started my first year at college at Wisconsin 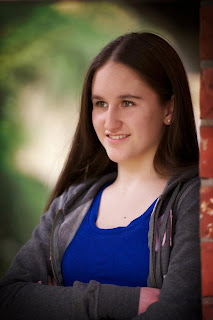 Lutheran College with plans of being an English major. My hobbies besides writing include Irish dance and watching a lot of movies. My favorite movies are Lord of the Rings. I read mostly fantasy fiction novels.

Is there a certain place that you prefer to write? Or draw inspiration for your writing?
I just like to write where it’s quiet. There really aren’t many places where I draw inspiration for my writing from; however, when I was twelve, I got the chance to visit the Normandy Beaches on a family vacation. Visiting that site was what prompted parts of the story of Darkwoods.

Do you listen to music when you write?
I did at first, but since I published Darkwoods my taste in music changed. The music I listen to doesn’t always fit with what I write, and it became very distracting. Now I write and listen to music at different times.

The Darkwoods series seems to have a C.S. Lewis/Narnia feel to it as well as similarities to Brian Jacques Redwall. Did either of these influence your writing? Or 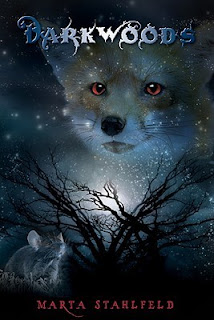 what other writers have influenced you?
I discovered the Lord of the Rings movies and the thrills of the Redwall series a few years apart. Lord of the Rings introduced me to the world of fantasy in the first place. It wasn’t until I read Redwall that I discovered the excitements of fantasy in written form. I remember teachers reading Chronicles of Narnia to me when I was in grade school, but I never really considered that fantasy until after I saw Lord of the Rings. Other writers that have influence me are John Flanagan (Ranger’s Apprentice) and J.K. Rowling.

Please tell us a bit about The Darkwoods series .
The Darkwoods series tells primarily about Princess Zuryzel, a Wraith Mouse who has the skills to rule a kingdom but little probability of ever getting to do so. In Darkwoods she is learning the particulars of fighting a war and still maintaining strength and optimism among those under her authority. Pasadagavra has her less in a place of authority and more in a place of individual responsibility, while she learns skills that will serve her throughout her life. Graystone, which is the anticipated title of the third book, happens quite a while after the war with the Darkwoods Foxes has ended and will explore new challenges to the princess.

This is an unusual series full of talking animals, where did your inspiration for your story and your characters come from?
I don’t know that I was inspired to write, exactly. I just started writing because I was bored and discovered that I loved it. As I said earlier, when I was twelve I visited the Normandy Beaches. There were some incredible stories that I heard there. The rest of the trip left plenty of time for daydreaming, so I reminisced about what I learned at the Normandy coast. Those daydreams eventually became Darkwoods and Pasadagavra. My characters are animals because, at twelve, I found animals easier to write about than people.

The names for your characters as well as the animal cities are also unusual, are there meanings behind these names? Where did the inspiration for them come from?
I honestly cannot remember where most of my characters’ names come from. I do remember that Pasadagavra came from the name of the Judean fortress of Masada, where the entire garrison killed themselves. At first Pasadagavra was to be a story about a massacre and revenge by a few survivors, but that was so unappealing that I changed that very early in my writing. As far as I remember, the other names don’t have any meaning behind them.

How long did it take to write each book?
Darkwoods seemed to take forever, but I think it was only about a year. The editing took almost three years. I actually spent much less time on Pasadagavra collectively, since I would work on it when I was bored with editing Darkwoods, but from when I started it to when I finished it was about four years. 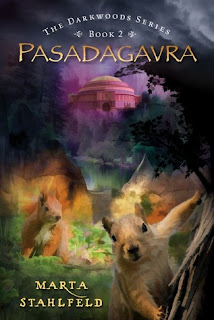 How many books are planned for this series?
At least four. There are two other stories I desperately want to write, one about Zuryzel’s mother and one about Zuryzel’s best friend, Shartalla, but I’m not sure if I’ll be able to write them since I only have a very vague idea about what I want to happen.

The cover art is beautiful for these books, can you tell us who designs it?
Laura Zugzda, who works with Sheryn Hara of Book Publisher’s Network in Bothel, Washington.

Do you have any other projects in mind at this time?
Lots. My laptop is full of stories that I intend to finish sometime in the future. Most of them are stories about people. I have considered writing a series that takes place in the same world as Darkwoods, this one focusing on the Ranger Mice, but I don’t think that will happen any time soon. I have honestly no idea what I’ll focus on when I’ve finished the Darkwoods series.

Is there anything else that you would like to add?
I hope that those who read Darkwoods and Pasadagavra find a positive storyline and a main character they can like. Anyone looking out for Graystone, I don’t know when I can publish it but I am working hard to have it ready to go to the publishers in 2013.

Thanks again for letting me do this interview.
Thanks for interviewing me!
Posted by Flo at 12:00 AM