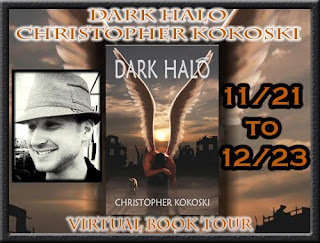 Thanks to author Christopher Kokoski for stopping by the Cotton Patch and giving us this interesting interview with Landon Paddock, a character in his book Dark Halo. 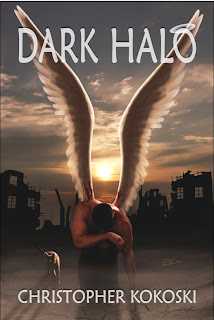 In a town besieged by shadowy, demonic forces, a father races against time to save his family.
Thirty-five-year old Landon Paddock has deserted his wife and daughter, abandoned his business, and secluded himself in his late parent’s southern Indiana ranch. But he’s barely lapsed into a drunken coma when a mysterious, winged stranger appears during a violent lightning storm, chasing him out into the maddening night with his estranged 15-year old daughter.
As layer after layer of reality is dissolved by a series of violent encounters, the only way to survive might be for Landon to band together with the family he destroyed to make one last stand against a sinister army of unthinkable magnitude.


About the Author
Christopher was born in Kansas, the son of an Army Ranger and Black Hawk pilot. He 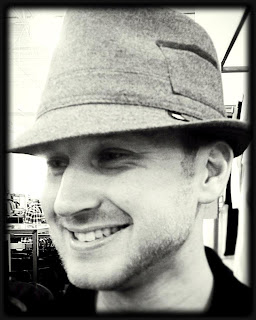 grew up in Kentucky and Germany, and graduated from Murray State University in 2002 with a degree in Organizational Communication. He spent the next three years laboring over his first book, Past Lives, while getting married to his college sweetheart, having a beautiful daughter, and more or less finding his stride in life.

He currently lives in Southern Indiana and works in Louisville, Kentucky as a national trainer. He has presented at local and national conferences on a wide spectrum of topics including communication, body language, cultural sensitivity and influence. Other notable activities include writing articles, short stories, novels and training materials for national and international audiences.
Christopher continues his passion and dedication to writing by working on additional novels, including a sequel to the Past Lives series. His most recent book is the standalone paranormal thriller, Dark Halo.

Paddock, that’s an interesting last name. Where you from? Born and raised in Southern Indiana, but my family roots are from England.

Do you own any pets? If so, what kind? Right now I don’t have any pets. Too much going on.

I heard about your parents. So terrible. I’m sorry for your loss. Thanks. I don’t really like to talk about it.

According to the newspaper, they died in a car crash, is that right? Three years ago today. Can we talk about something else?

Sure. Tell me something interesting about yourself? I sneeze when I’m nervous or scared. My grandfather did it, too, so I guess I got it from him. He says he sneezed his way through two tours in Vietnam.
So you come from a military family. Any good with a gun? I’m no marksman, but I can take care of myself if it comes down to it.

I bet. Tell me about your family. You are married, right? Legally, yes. In reality…I don’t know. My wife, Lucy, and I have been…separated for nearly three years.

What happened? After my parents…I couldn’t think, couldn’t sleep. All I wanted to do is get out, go somewhere, be someone different. So, one day, I just…left. I walked out. It was the worst decision of my life. I love my family.

Sounds like you hope for reconciliation? I don’t know what Lucy will think if she reads this interview, but yes, I would like to think, to hope, that one day she might be able to forgive me. My daughter, Katie, too. She’s actually coming to visit soon. I’m nervous about it, since it’s the first time we’ll see each other in a few years. But it’s progress. I hope it goes well.

It’s an interesting time for a visit. I guess you’ve heard about the nasty weather? Yes, I’ve heard something about it. Big storms. I guess I can’t stop it, but hopefully it’ll blow over before she arrives.

Have you also heard about the other rumors surrounding the storm? You mean about the ghosts and goblins? Yeah, my neighbor Frank and his wife, Gina, told me about them. Something about monsters creeping around during violent storms and earthquakes throughout history. I don’t give much credence to childhood fairytales.

So, what do you believe in? You probably know from your research that my father was into all kinds of theories and beliefs, from mainstream Christianity to more controversial ideas like demon possession, aliens, etc. Me, I lean more toward what I can see and touch and feel. I guess that’s why I run contracting business…or used to, anyway.

Are you open to considering there is more out there than we can explain? I don’t see what possibly could convince me, but the world is a big, strange place, so you never know.

Truer words have rarely been spoken. Landon, thanks for coming in for the interview. Good luck with your daughter’s visit. I hope it goes as well as you want it to. Thanks, I think I’ll need it.