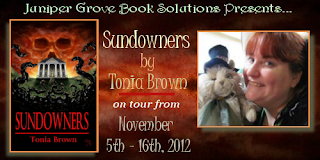 I would like to thank author Tonia Brown for sending us this great excerpt from her book Sundowners as well as a great giveaway. Prizes include five (5) eBook copies (Mobi or PDF) of Sundowners by Tonia Brown. Giveaway is International. 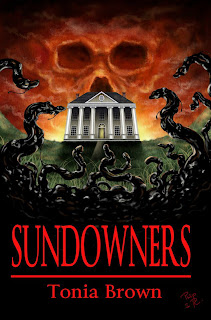 Synopsis:
SUNDOWNERS is a backwoods southern horror about the importance of family, the power of gossip and the nature of the artistic muse.

Fifteen years ago, siblings Coil and Cassiopeia suffered an incident in the woods behind their family home. An incident that neither of them can remember in full, that nearly killed Cass and left Coil accused as her abuser, and robbed young Coil of his artistic potential yet boosted his little sister into an almost overnight sensation in the art world. Now, fifteen years later, the self-exiled Coil has been called home to deal with his world famous sister as she suffers from Sundowning; severe and violent personality shifts after the sun sets. In order to cure her, the pair of siblings must come to terms with their old demons, both figuratively and literally. An ancient and terrible horror has risen once more from the backwoods of the family home, and this time it threatens to not only tear their family apart, but also the entire world.
Amazon
Goodreads

Coil crept up the staircase and made his careful way to Cass’s room before he remembered that the medicine she was on could knock a rhino off its feet. He cracked her door, wincing at the squeak despite her medicated state, and looked in on her. Cass was indeed asleep, her chest rising and falling in even spaces as she breathed in that steady peace that came with rest. The room was all but frozen, thanks to an air-conditioner of her own set on what must have been zero degrees. Or maybe one.

He stood in the doorway and glanced around the low light of his sister’s room, amazed to see that little had changed in the years he had been gone. The main theme was still pink ruffles, and stuffed animals dominated every possible space. It looked like a young girl still lived here. For a moment, Coil wondered how Cass stood it, traveling the world and staying in the finest of hotels, only to return home to this. Then, all at once, he knew without being told that it was her idea. This little-girl décor was what she wanted. Once again, she acted and was treated like a child.

Would she ever grow up? No. He knew she wouldn’t.

As he stood in the doorway, contemplating his little sister’s unusual taste, Coil thought he heard something over his own thoughts. A murmur of sorts. He followed the sound across the dim room, right to Cass. There she lay, chin upturned and lips parted, as thin tendrils of warmth rose from her lips with each outgoing breath. Coil strained, leaning into the room as he listened. Yes, she was talking in her sleep, or rather whispering. Her mouth barely moved as a distant hush of words drifted away from her, almost as silent as an escaping breath. If it weren’t for the hissing of an ‘S’ or the coarse edge of the occasional ‘K,’ he might never have heard it at all.
But what was she saying?

Coil thought about just going right in and listening. And that would be the moment she would come out of her drug-induced stupor, ready to break him in two. No, thanks. Instead, he stood silent, stock still, straining with every ounce of hearing he had in him, trying to understand what she was saying. But it was no good; he couldn’t make it out. And he wasn’t going in. No way.
There was something else about the scene that kept him at bay. Something in the cold air or something in the room. Coil didn’t know. Just something that made him feel awkward, made him feel wrong. It struck him that it was the room itself, that perhaps the angles were odd, or perhaps the pink ruffles and piles of stuffed animals were the result of someone trying too hard to be something she wasn’t. That was it. Under the childish exterior, there was something deeper, almost sinister about the place. As if he could peel away the affectation only to discover something dreadful. As if something were asleep, just under the veneer of Cass’s hopes and childhood dreams.

Something terrible that would awaken at any moment.

Coil grabbed the door jamb to keep from toppling over into Cass’s room. What was he doing just standing here, leering at his sister in her sleep? God, he needed a drink. And, his stomach reminded him, an antacid. “Yes?”

Company? Someone was here? He had been so enthralled by the pink frills of his sister’s room that he didn’t hear someone pull up. But it wasn’t just the pinkness, was it? There was something else drawing him into the …

“Coil!” Beth cried. “Get your scrawny butt down here now!”

“Yes, ma’am!” he yelled in return as he closed Cass’s door and went to see who his visitor was.

About the Author:
Tonia Brown’s short stories have appeared in a variety of anthologies. She has cranked 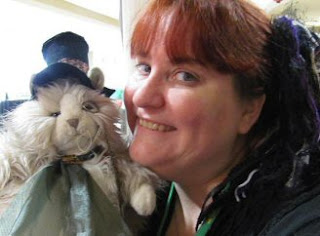