Queen of the Stars 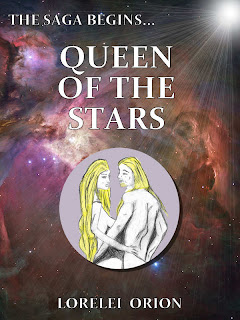 It all begins within the colonized Cassiopeian Sector, within the marvels of the 23rd century, where planet Adriel’s savage revolutionists abduct beautiful Princess Royal Sarra Shantay, the heiress apparent of King Ellis II. Sarra, innocent yet highly spirited, is the rebellious captive of alias Raine Nicks, the handsome yet vengeful rebel leader who ultimately aims to end the Shantay worldly rule … but his plot to ransom her for illicit weapons goes awry by dissidence within his own clan, sweeping her off with him in a breathtaking adventure between Kan and Myrrh, two of the Urania Star System’s exotic planets.

Now allies, joining his cause to free Adriel’s oppressed, she also becomes caught in the perilous rebellion, for only his mysterious identity can uncover the sinister corruption deep within the sovereignty. The revolution erupts, sending her on the path of her destiny—the wondrous and tragic Throne.

This excerpt from Queen of the Stars is after Sarra captures Raine, making him her prisoner. But, who will be the victor ...?

Raine roused, guessing that he still lived since he felt pain. He ignored the throbbing in his head and cheek and braved the light, lifting his heavy eyelids. He was on his back on a bunk, his arms spread out above him with his wrists handcuffed and tied to the cables. Suddenly feeling defenseless, he yanked forcefully on the ties.

“Well, well, alias Raine Nicks. We shall soon learn who you really are.”

He made certain that his fury was on his face when he finally looked at her. His breath caught. The princess sat within the chair in the main cabin, mocking him with her brilliant, dark-blue eyes. She wore the red gown—the one from his travel bag—seeming like she was aflame. Her golden hair spilled about her, and she was at ease with one leg curled up beneath her, the other bent and showing a tempting calf and foot. She dangled her arm over her knee, and in her hand was his weapon. Slowly, she glanced back and forth from the M-5 to him, and each time she met his gaze she was a bit more pleased with herself.

Smugly, she asked, “Or, would you like to give me your confessions now?”

Raine suppressed an infuriated sound and turned away from her stunning beauty. Truly, the woman was incorrigible.

She laughed smoothly, but he didn’t acknowledge her, even when she came to stand before him, filling his nose with her unique blue rose scent.

“Defiant, still? Will you be as silent before your executioner?”

“Execution, is it?” he rasped.

“Perhaps. Or maybe I will lock you up in a cage for the rest of your life. I’m not sure which will do my heart best. I can’t decide,” she considered, as lightly as if she debated about what to wear for a day. “I could keep you in a cage until I decide the date of your execution. Ah—either way you’ll find out soon enough. You’ll have a grand reception on Adriel. My father knows I’m coming. I sent him a message.”

Raine’s mind raced—he knew that he was in trouble. “Do you know how to pilot a ship? It takes skill and training ... Set me free, or you may never see home again.”

She began to amble about. “I have the skill and I practically have trained myself. I will see my palace. And what a glorious reunion it will be! The princess royal—abducted, ravished and humiliated—returning home triumphant. With a prize! Once a ferocious savage that struck fear in a nation, now a meek little coward.”

“The princess talks mighty bold with a gun in her hand.”

“And why not? I finally have you where I want you. How the roles can change—you won’t even look at me! Perhaps you can’t bear the sight of the woman who has bested you?”

Raine took the challenge. She was at the foot of the bed, standing akimbo. She raised a golden eyebrow and airily tossed back her hair, and on her crimson lips was a chilling smile, one so out of place on such a beautiful face.

“See,” she taunted. “See the one who has conquered you.”

His eyes widened as she seductively ran the weapon down the front of the luminous, flame-hued dress, stopping at the hip. Her décolleté threatened to spill her full breasts free, putting him in a dangerous position. His desire stirred, even while she pointed the M-5 at him.

“So, what’s it like to be afraid?” she asked, closing one eye and aiming at his breast.

“My greatest fear is the loveliness of my captor. Come to me,” he crooned.

She laughed softly. “Never! Fear me in your dreams!”

Raine clenched his fists while she moved for the bridge’s door. Before disappearing beyond it, she added insult to his injury by blowing him a saucy kiss.

Sarra tossed the gun carelessly onto the command chair. She stalked to and fro around the bridge, miffed at him for showing no cowardice. There had been contempt and lust in his expressions, but not the tiniest trace of worry. What would it take to make him admit defeat?

And, he hadn’t even commented about the dress— “I’ll be damned if I ask him about it!”

She lifted his bag onto the chair and hesitantly pulled out the black lingerie—this was what truly troubled her. “The honeymoon gown,” she whispered, running her hand carefully across the fragile mesh. “Tolly Kay had said that the style was all the rage.”

Sarra knew how she would look in the dark outfit, for she had seen it on her image in the clothier’s hologram. Still, she wondered how it would feel. It seemed like ages ago when she had shuddered to think that Taylor Gray would find pleasure with this kind of lingerie. So much had happened since then; she was no longer a virgin or a girl. She wanted to wear it for a true man, to have his powerful, large hands rip it off her ...

She deposited the garment on the floor and went to the port. As she watched the lights of space, the more unpleasant consequences of her freedom invaded her head. Lord Gray was still her betrothed ... Raine’s fate ... How could she imprison him for forever but keep herself away? How could she bear locking him up, when even now, with him all bound and defenseless, she yearned to go to him, and ...

Simply, she would have to be strong. She was the princess royal and she had her responsibilities. He was her prisoner now and she would treat him as such. But, she couldn’t leave him like that all the way to Adriel!

She took up the gun, his travel bag, and the handcuff’s remote, and strode with purpose to his cell ... 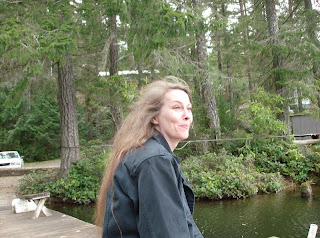 The stars have always fascinated me. When I look up at their bright sparkle, I see just how vast our universe is, filled with

billions of suns and moons and planets—and that’s just our Milky Way Galaxy alone—and there are hundreds of billions of galaxies out there! And whether spiral, elliptical, or irregular, I believe every one of them is teeming with life—there are, no doubt, other planets similar to ours, and mysteries of unfathomable magnitude. I think of how nice it would be to have the technology to go out there. Wouldn’t it be great to live in a time when space flight between the stars is possible?

That’s why I love Science Fiction. And, I’ve always loved the charming qualities of Romance. It’s natural to blend the two. When I write, I get to sail the celestial seas and experience the spirits of my characters who live in my imagination—their trials, their struggles. It’s the thrill, the excitement, and their emotional journey into the soul … with a warm caress, a flirtatious smile, a stolen kiss … the fiery passion … I get to live in another age, and explore strange, new worlds…

To put it simply, I love to write. It always makes my day a hopeful adventure, being one who believes that, with the future, the possibilities are endless.