Something Of A Kind 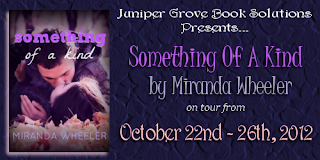 Author Miranda Wheeler has sent us an excerpt from her book Something of a Kind and she is offering a great giveaway. There are 5 ebook copies up for grabs internationally. We appreciate her stopping by The Cotton Patch on her tour. 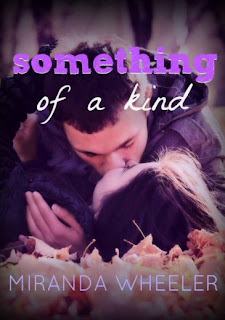 Synopsis:
As a 17-year-old artist, Alyson Glass had her future mapped – she’d go to art school, study in Paris, and eventually make enough bank to support her single mother. The trouble is, things don’t always go as planned – especially a sneak attack of stage-four ovarian cancer.

Suddenly motherless and court-ordered to move in with her estranged father, Aly’s forced to leave behind her New York hometown for the oddities of Alaska. Ashland seems like cruel and unusual punishment – at least until her dad ditches her at a local restaurant and she crashes into a super-hot, guitar-playing diner-boy with a horrific home life.

Noah Locklear is used to waiting – waiting for his shift to end, waiting until his drunkard parents go to bed, and waiting for the day he can get his sister away from their dysfunctional family. The summer before senior year, the elusive researchers that ruthlessly pry into Ashland’s history shatter a final cord with Noah’s abusive father, one of the town’s elders. Unfortunately, as far as his parents are concerned, the new girl who’s changing everything belongs to the outsiders. With their relationship increasingly forbidden, the struggle of knowing who to trust reveals that nothing is what it seems.

As Aly encourages Noah to investigate the legends he’d always written off as stories, they uncover the one thing their fathers can agree on: there’s something in the woods.

About the Author:
A current high school student, 16-year-old author Miranda Wheeler lives with her 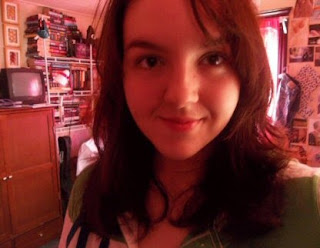 loving family in her hometown of Torrington, Connecticut. An avid reader, she’s been whipping through books and producing novel-length projects (though none published prior to Something Of A Kind) from the early age of eleven. Having previously released short stories, some published in magazines such as TeenInk and others via “indie” mediums, she has many plans of continuing to write, as well as pursuing other passions and an eventual teaching career. While the official cover is a work in progress and the title won’t be released until the promotional media is obtained, several other projects are in the works: a YA steampunk novella, a YA paranormal romance, and a YA sci-fi-series, in addition to unofficial talks of a Something Of A Kind sequel
Amazon Author Page
Facebook
Twitter
Goodreads
Blog