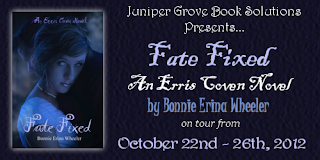 I would like to thank author Bonnie Erina Wheeler for letting us be a part of her book tour and for sending us this great excerpt from Fate Fixed. 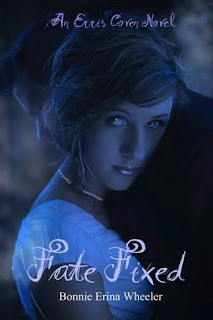 Synopsis:
When Lexie Anderson’s mother suddenly announces she is marrying a Romanian immigrant, Lexie willingly leaves behind her busy life in Connecticut for her penance in the "Moose Capital of the World.” Small town living is strange enough, now Lexie must cope with her overbearing stepfamily monitoring her every move. They disappear into the woods at night and keep a strange secret locked in their shed. Her once calm mother is now having violent outbursts and Lexie’s little sister is hearing sinister sounds coming from the forest behind their new home. Lexie’s biggest surprise comes when she discovers the boy she has been dreaming about since her accident is living in Maine. Despite Torin’s questionable reputation, Lexie cannot resist the physical and emotional attraction pulsating between them. Animals and people in town are turning up dead and Lexie learns the strange new world she lives in has real life monsters. Just when she decides she wants to be with Torin forever, she must fight to protect her mother and sister from being harmed by a formidable evil.
Links
Amazon
Barnes&Noble
Goodreads 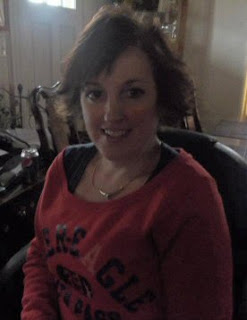 Having grown up in Berkshire County, Massachusetts, Bonnie discovered her love of writing early on, but did not begin writing novels until May 2011. As the daughter of author, Glen William Ruane, storytelling and world building is a family affair. Bonnie’s daughter, Miranda E. L. Wheeler and son, Robert D. Wheeler, share in the family’s passion and have both published in the last twelve months.

When not in class or working on her next novel, Bonnie enjoys spending time with her husband, Jerry. Together the two have been writing their own special love story since marrying in April of 1995. Their children Miranda, Justin, and Bobby give them great joy. Their family is made complete with the addition of Petey, a Spanish water dog, they adopted from their local pound.

Bonnie’s plans for the future include writing more novels in the Erris Coven Series, as well as, writing several contemporary young adult novels that have been in development for some time.

LEXIE
Lexie shivered with excitement when the very flamboyant Theo pulled into the yard a little after eight. She was surprised how nervous Alik seemed until after they were seated in the Subaru station wagon and heading down the road towards the center of town.
Perhaps Alik feared Max would invite himself only to discover their evening plans included an excursion into the Maine woods for a little adolescent partying. How Maxim would behave was unknown and Lexie didn’t want to find out.
By the time they pulled into the overgrown park, Maxim was the last thing on Lexie’s mind. At first glance, it was like any other state park with dense red spruce and balsam fir trees towering over the scattering of seasoned picnic tables and fire-pits. But as they followed the winding driveway, Lexie was impressed with the forest’s sheer size and overgrown brush. There were animals and the occasional hikers around, but August weekends belonged to the local youth.
Through the passenger’s side window, Lexie inhaled the crisp scent of pine. The Outback bumped along until reaching a second pull-off that opened into a clearing filled with dozens of automobiles. Several of them faced a large pavilion, their headlights illuminating the entire inside of the structure, which was packed full of picnic tables topped with coolers and snack foods. A tall boy with blonde dreads was playing DJ while others clustered around different tables and by the bonfire in the clearing.
Everywhere Lexie looked there were young adults: some were laughing, some kissing – a few played hacky sack. It was a lively gathering unlike she had ever seen. She couldn’t stop the smile from skittering across her face, because it appeared they were good at it.
Theo clutched Lexie’s hand and headed for the pavilion with Alik closely following behind, his eyes wide with wonderment. She spotted Brooke on the back of a truck’s tailgate with Cian’s arms wrapped around her. Beside them was a strikingly attractive guy with longish red hair, grinning as he captivated their attention.
Theo was practically vibrating with excitement, “That’s Cian’s friend Teagan – watch out for him, he can talk girls out of their clothes without even moving his lips.”
A ragged table was covered with every snack option a person could want – pizza, soda, chips, veggies and more. Lexie added her cookies and pretzels to the smorgasbord. An overdressed platinum blonde with shoulder length hair strutted up beside them, “Who are your new friends Theo?”
“Keep your claws off Courtney.” Theo forbid, putting up his hand.
Always the gentleman, her brother offered, “I’m Alik Serov and this is my sister Lexie Anderson.”
Without a second’s hesitation, she draped her arms around him and pressed her body into his. “Well, at least some people have manners,” she bit on her lower lip.
Theo plucked Lexie away before she even had a chance to detach her brother from the blonde’s talons. She wasn’t one quick to judge, but the girl was irritating. She hoped Alik could find them once his charity ran out.
“I can’t stand that…thing,” Theo spat. “She makes my life hell.”
“How old is she?” Lexie couldn’t tell with Courtney’s pancake makeup.
“She’s our age and either harassing me because I’m gay or because I’m Asian. It gets old fast. Of course, there hasn’t been anyone new for her to sink her teeth in since I moved here five years ago.” Theo’s eyes darted back at Alik as he talked to a vigorous Courtney. “Looks like your brother can be her new obsession for a while – it’s usually Cian’s cousins that have to fend her off.”
Lexie noticed that Courtney’s focus on Alik was intense, like a shopaholic at a shoe sale. He seemed to enjoy it. Maybe she was a potential girlfriend, claws or not. Lexie hoped Alik would survive her anyway – at least she could have a little space from him.
Posted by Flo at 12:00 AM