Excerpt from The Oligarch 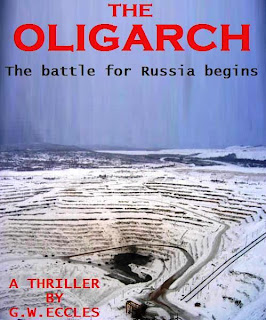 THE OLIGARCH: A THRILLER is available from Foyles, Amazon, Barnes & Noble and all other major online book stores. Links to these stores can be found on the novel's website.

Synopsis: Following his controversial election for a third term amid widespread protests and allegations of vote rigging, the Russian President is determined to destroy the oligarchs before they destroy him. When the global economic meltdown decimates their wealth, the President seizes this chance to demolish their power base. His greatest opponent - Anton Blok, owner of the mighty Tyndersk Kombinat - has a secret agenda and faces far more than just financial ruin as his empire threatens to fall apart, and the President knows that his old enemy will stop at nothing to avoid catastrophe. With battlelines drawn, he turns to Alex Leksin, a business troubleshooter of Russian descent, to thwart Blok's plans. Against the challenge of hostile Arctic conditions, Leksin must tread a dangerous path through a labyrinth of corruption, terrorism and obfuscation until the exciting and unexpected denouement takes place in Russia’s northernmost seaport. Set in Moscow, Ingushetia (Chechnya’s neighbour), and Tyndersk, a Siberian mining town inside the Arctic Circle and geographically cut off from the rest of Russia, the plot twists and turns within an authentic and disturbing background.

In THE OLIGARCH: A THRILLER, the Russia President calls in Alex Leksin to investigate what is happening in Tyndersk Metals, a monolithic mining company which the government is about to renationalise. Situated in northern Siberia well within the Arctic Circle, the region surrounding Tyndersk is one of the most polluted places in the world. In the excerpt that follows, Leksin gets his first view of the town: -

Leksin skipped what passed for breakfast in the featureless hotel dining-room, gulped down some tea, then went out to inspect the Subaru Forester they’d assigned to him. Four-wheel drive, winter tyres, turbo engine, it was designed to cope with extreme conditions. He looked around. Even at a quarter-to-nine, street lights and car headlights still shone through the blue twilight of the polar day. The whole place had an alien feel, and he sensed the familiar draw of the unknown.
He’d declined the offer of a driver, he didn’t need the company’s man reporting his every move. Nevertheless, he’d been around the block long enough to suspect they wouldn’t give up there. He checked he wasn’t being watched, then extracted a hand-held scanner from his briefcase and slowly ran it over the car’s interior. Sure enough, twice it bleeped to highlight bugs placed front and back. Next, he ran the scanner underneath the chassis. Bleep. A tracker. Just as he’d expected. He left the devices in place, no need yet to draw attention to the fact that he knew.
As soon as Leksin switched on the engine, the GPS screen lit up, and he keyed in his destination. A few minutes later, turning onto the ring road, Leksin caught his first glimpse of the devastated landscape that enveloped the town and drew in his breath. Dense black smoke spouted from the narrow mouths of a smelter’s three tall funnel-shaped chimneys, spreading in a suffocating canopy thick as felt. Straight ahead, pylons and cables crossed the sky like enormous fishing nets hung up to dry. The cold metallic disc of the moon still hovered above an untidy heap of freight containers. Here and there wisps of stunted trees needled their way through the snow in strange, contorted patterns. A railway track meandered into the distance, undulating over the rugged terrain. Leksin shuddered: the monochrome, desolate scene seemed lifeless, reminding him of the haunting imagery of the Shevchenko urban landscape that hung on his study wall at home. No wonder the people here had short lives.
He joined the main road to Dostik, following the route of the railway track. The left side was bounded by thick pipes, more than a metre in diameter, raised off the ground by jagged concrete brackets and lagged with silvery asbestos fibre. On his right, piled between the road and the railway track, obsolete vehicles and equipment lay abandoned and rusting – torn sheets of metal and knotted cables, decaying wooden crates, ancient lorries with windowless cabs peeping out through the grimy snow.
Brake lights from vehicles a little way ahead flashed through the gloom, and Leksin slowed, coming to a halt in front of a monolithic building almost a kilometre wide whose towers sourced the mushrooming stream of black smoke that hung everywhere. A peeling sign on the roadside told him this was the copper smelter. Glancing across the field of grey, polluted snow, he caught sight through the open entrance of giant cauldrons spewing out billowing flames. With reluctance he acknowledged the churning in his stomach and the tremble of his hands, his inevitable reaction when confronted with fire. Instinctively he forced himself to take slower, deeper breaths, the familiar routine that let him cope with the problem.
Exhaling, he noticed with relief the traffic shifting forward again. As the road rose steeply ahead, the lights from an elongated, low-lying building flickered in the distance. This was the FSB headquarters where the takeover team had set up its operations and his first port of call. 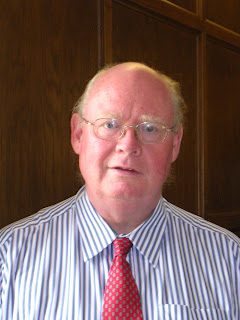 George Eccles lived in Russia and Central Asia for ten years during the tumultuous period that followed the breakup of the Soviet Union. Deeply immersed in Moscow's business world, his work brought him into regular contact with the murky world of real life oligarchs as they struggled to get to grips with the fallout of Yeltsin's controversial 'loans for shares' scheme. He now lives in the South of France.
Posted by Flo at 12:00 AM