Adding Tension to Your Stories

No matter what the media, an author’s job is to ensure the audience cares about the story. One way to do this is add tension. This is true whether you write a graphic novel, a written novel or a screenplay for a film. Even a poem or a painting must create some sort of drama. As an author of both written and graphic novels, I can tell you that how I create tension in a storyline is actually no different no matter what I am working on.
Stakes: Most importantly, the protagonist’s happiness or even his or her life, depends on the outcome of the book. The protagonist must be weaker internally or externally than whatever it is he or she is facing. The stakes might be linked to outer or inner conflicts.

When I set up the stakes of a story, I like to consider the notion of DEATH OR WORSE. 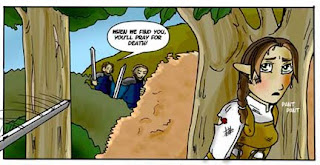 In my graphic novel series, Faminelands, Lark is a young elf with a crazy father, a dead mother and baby brother, but worse, due to her prowess in battle, she has been promoted high above her peers. Now her people need her to be The Lady Meadowlark Daughter of Lady Nora, Daughter of Elder Matron Aster, but inside she is still just Lark. So she seeks out her elder brother, Orin, to help her. She needs a him to be her brother, friend, and comrade in arms. Unfortunately, Orin is indebted to crime syndicate and tortures people for a living.
In Book 1, The Carp’s Eye, the reader sees she has a plan to free her brother, but if she fails, she might be imprisoned into the gilded cage of Lord Malak’s harem, Orin might choose to kill her, she might fall in battle, or she might even choose to kill herself.
In Book 2, Living Stone, and in the upcoming Mareton’s Curse, the stakes for Lark include being processed by a ghost, torture, and plenty of other less than happy endings. My point is in each book, she will face DEATH OR WORSE, if she fails in during any of her quests. This sets up the tension.

Characters:
When a reader first meets your protagonist, the reader knows nothing about them. They are strangers. The reader wants to identify with the protagonist, but perfect people are boring.
Characters must have emotional needs, wounds and real problems. With each frame or page, the reader discovers the character’s flaws, the influences from his or her pasts. As each detail is exposed, the tension mounts, as does the reader’s vested interest in your protagonist.
Don’t worry if your reader doesn’t LIKE the protagonist. All that matters is your reader has a vested interest. 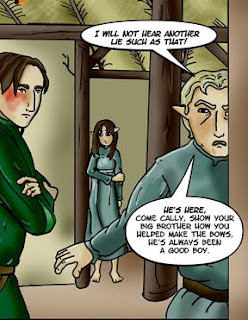 Forgive the modern vocabulary; since Lark and Orin don’t use these terms. Orin has anger management and an addiction to gambling, Lark suffers from posttraumatic stress disorder from the wars as well as the violence of her upbringing. This tension rules both The Carp’s Eye and Living Stone. Not only does she have to get her brother to agree to allow her to stay with him, but she also needs to get him to become her Champion.

Look closely at both panels from Living Stone both dealing with the domestic violence in the book. Orin was just struck by their father, but he isn’t afraid. He is still standing upright. He is frustrated by Calafas’s insane babble about their dead brother. Calafas is older and weaker than Orin. The audience isn’t afraid for him. 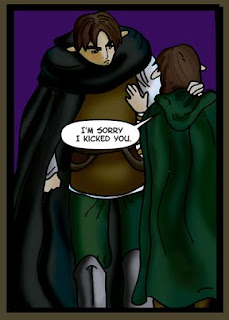 However, in the second panel, Lark most definitely is afraid of her brother. Orin is bigger and stronger. He almost doesn’t fit into the frame. His fist is clenched and he has her by the back of the neck. She is in for a beating and she (and the readers) know it. No one is surprised when the first punch is thrown, but the moment is tense. I have said it before and I will say it again: never apologize for giving your character’s real problems.

Changes: You must throw the protagonist off balance, while the ensuing changes keep orientating them further off course. There must be a struggle to right onesself. They should not quite succeed until the end (that is if you want a happy ending.)
Lark needs to move from being the girl to the Lady. Orin needs to move from being an Enforcer to being a Lady’s Champion. The journey that the characters take in order to get there and the mistakes that are made is the story that binds together the three books in the Faminelands Series.
Pacing: The biggest mistake authors make is writing a fast paced scene too fast. With graphic novels, panel size dictates speed. With written novels, short sentences can give you the same feeling. Don’t be afraid of using quick pacing however that doesn’t mean cut the details. Slow down. Make sure you are writing to all five senses. Let your character feel his dry mouth, let her hear coins being counted, etc. Make every action deliberate. If possible get inside your character’s head.
After six pages of non-stop action, during the main battle of Living Stone comes one of my favorite lines: “As the arid breath fills Orin’s lungs, he realizes he will die, he pulls Lark into his chest with the hope that she may still live. He is not afraid, but hopes his bowels don’t go. He wants Lark to remember him as a brave noble warrior, not a dead man covered in his own filth.”
The reader is not sure what happens to either of them until they turn the page. Remember as authors, our goal is to get the reader to have a vested interest in the outcome for the characters, so they must turn the page!
I hope you found this post useful, what other ways do you use to bring tension to your stories? 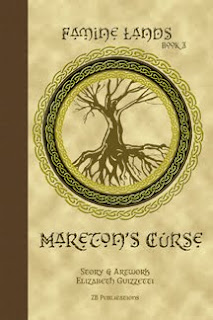 Elizabeth Guizzetti loves to create. She feels she has the best job (or jobs) in the world. She gets an idea, runs with it until it leads her to generate whatever it is going to be. She currently lives in Seattle with her husband and two dogs. Faminelands: Mareton's Curse will be her fourth graphic novel.
Credits include: Faminelands: The Carp's Eye, Living Stone, Lure, and the comic book series, Out For Souls&Cookies. She has also written a science fiction novel  Other Systems and the short story  Unintentional Colonists.
Her homeblog is http://zbpublications.wordpress.com
She and her comic book partner in crime Maria Masterson are running a Kickstarter campaign in order to print Mareton’s Curse until November 16, 2012. If you are interested in knowing more, check it out!
Posted by Flo at 12:00 AM